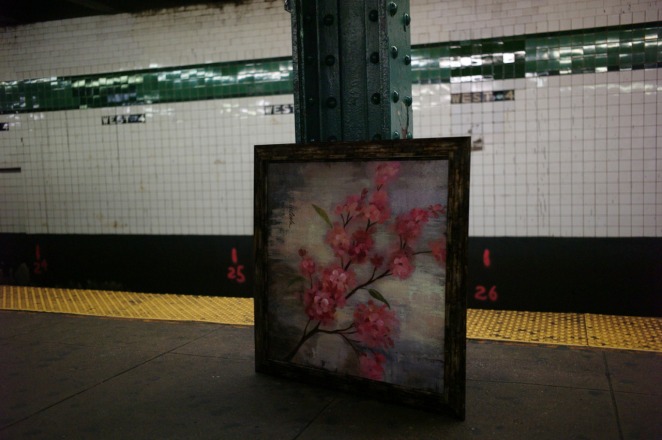 I just walked in from 30 minutes of street shooting.  I didn’t create a single worthwhile image.  The image above may have been the only thing I even shot.

When I posted on Twitter that I had failed to get a good shot today, the question was asked of me by @gcahal, “Do you go and look for a shot? Or do you go and just see what happens? I’m usually looking and don’t find it.”

I don’t look for a certain shot.  I’m open to anything.  Almost.  My personal rules for street photography is that I don’t shoot kids because they aren’t fair game in my mind.  I don’t shoot homeless people or anyone down on his/her luck because they don’t have the ability to stop the intrusion of my camera if they don’t want to be photographed.  I don’t shoot signs, textures and lights because I don’t care about those things, and it’s just so easy, anyone can do it.

My actual technique for street shooting isn’t even focused on photography. It’s focused on interacting with people.  I call it Photo Sarging -named after a term used by what is now considered, the “Old School” Pick Up Artist community.  In a nutshell it works like this.  I go out for say, 30 minutes, and I try to talk to as many people as I can.  It doesn’t matter what I say.  Often I remark on what they are wearing, or what they are carrying.  When I see a couple, I might use a canned opener like, “Who causes more problems in a relationship, the guy or the girl?”

It doesn’t matter what they say in response to my opener.  All that matters is that we are talking.  I might even change topics without warning.  The goal is to create the feeling of us having the type of conversation that we would be having if we were friends.  I want to avoid introducing myself or asking them the standard, ‘Where are you from?“ questions because that reinforces the idea that we are strangers.  At some point in the conversation I’ll say, "Can I get a shot of you?  I love your scarf,” or whatever it is that is interesting about the person.

All of that is the easy part…

Here’s the thing.  For this to work you have to be in a certain state, or zone.  You have to create a reality that you are living in.  A reality where everything is happy and carefree and there’s a small party going on around you.  You have to believe in that reality so strongly that you infect the people around you, and they start believing in that reality.  Imagine a subway car where everyone feels safe and is reading their iPads and smartphones without fear of robbery.  (Happens all day long in NYC).  Suddenly one thug looking gentleman enters the car.   Everyone’s mood changes.  Now the subway is a scary place. That is what you need to do -change the mood of the people around you by your mere presence.  You need to make people feel they are in a happy, safe, fun/party place because that is the zone that you are in.  You need to believe that taking pictures of people you don’t know is the most normal thing in the world.  You need to believe that to the degree that the people you are talking to start believing it as well.

To reach this state you are going to have to go out every single day.  Maybe for 10 minutes, maybe for 30.  But every day.  You need to focus not on the photography but on the interactions with the people.  Free yourself from outcome.  Don’t worry if you don’t get any good photos, or any photos at all.  Just be in the moment.  And that moment is a freewheeling happy, casual, friendly moment.  It’s as if you are drunk and you have lost the self conscious feeling that dominates your thoughts when you are sober.  You’re smiling and talking to everyone, and you aren’t the least bit concerned with their reaction.  You’re not hurt by the rejection and frankly, you aren’t even turned on by the positive reactions.  You are self amused.  This is crucial.  You can never communicate to the people that you meet that they have control over your emotions.  You need to be in control of your emotions -and their emotions as well.

You will always fail on your early approaches each time you go out.  But with each rejection, you’re getting closer to a success and the successes are cumulative.  This is also crucial.  When you leave one successful interaction, you’ll start the next interaction deeper in your happy/party/friendly zone and be more likely to succeed again.  And if you succeed on your second approach, you are more likely to succeed on your third.

So that, is my approach to street photography -Photo Sarging, if you will.  It’s an approach developed from studying “The Game” (book) and “Annihilation Method” (video) by Neill Strauss and numerous videos including, “The Game is an Odyssey of the Mind” by Owen from Real Social Dynamics.  But it’s all backed up by Orwen Klaff in his book “Pitch Anything” which has nothing at all to do with picking up women but has everything to do with creating a “frame” that you believe in and overpowering someone else so that your frame becomes their reality.

This doesn’t mean that you won’t have #FAIL days like I did today.  But I assure you, my hit rate on street photography is much higher than most.